The research achievements of the government and French major and valedictorian from Sleepy Hollow, New York, include four published papers exploring topics such as immigration and misinformation, a post-baccalaureate fellowship, and participation in a fossil dig in South Africa.

Clayton’s capstone achievement was joining two professors in the Department of Government, Yusaku Horiuchi and John Carey, in writing a book, Campus Diversity: The Hidden Consensus, to be published by Cambridge University Press. She will enter Stanford’s PhD program in political science this fall as a published author.

Each accomplishment, she says, was made possible by the exceptional teacher-scholars who have been her mentors, friends, and inspiration. 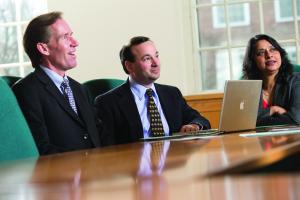 “I have loved just about every professor I’ve had here,” says Clayton. “They’re accomplished scholars who have conducted amazing research. And yet, you can tell that when they’re in the classroom, their number one priority is teaching you. At a lot of other schools, students are taught by grad students or adjuncts. But here, I was always taught by these incredible individuals who made me want to work hard and ask questions.”

Clayton says when she asked her professors questions in class or by email, their response would often let her discover the answer on her own, rather than just provide the solution outright.

“For example, if I emailed Yusaku with a question about how to code something, he wouldn’t say, ‘OK, here’s the answer.’ Instead, he would construct some type of problem that would let me figure it out on my own. I’m sure that took him more time than if he were to just answer the question. But working through the problem was a more powerful way for me to learn.”

Even distributive requirements became transformative experiences, Clayton says. Introduction to Biological Anthropology, taught by Professor Jerry DeSilva, was so engaging—“Every day I walked out of class thinking, ‘Primate biomechanics are so cool!’”—that she took three more anthropology courses and then traveled to South Africa with Professor DeSilva and a class that discovered a two-million-year-old fossil of an early human ancestor.

The origins of Campus Diversity: The Hidden Consensus date back to Clayton’s junior year, when she worked with Professor Horiuchi as a Presidential Scholar. He and Professor Carey were interested in researching attitudes toward diversity in student admissions and faculty recruitment, a hot-button issue for many, using a technique known as conjoint analysis, a marketing research tool to determine consumers’ multidimensional preferences.

The three of them created a survey that asked respondents to choose between hypothetical applicants for admission or candidates for faculty recruitment at Dartmouth—not knowing that the central purpose of the survey was to measure attitudes toward on-campus diversity. The results showed that nearly all Dartmouth students favor demographically diverse student applicants for admission and candidates for faculty recruitment.

They then conducted the survey at a mix of other schools, including the Naval Academy, London School of Economics, University of North Carolina, and University of California, San Diego.

“We found the same results that we had found at Dartmouth, which is that students across the board—white and non-white, low-income and high-income, male and female—are generally pro-diversity,” says Clayton. “In general, there wasn’t any strong animosity toward any racial, income, or gender groups as contemporary media coverage might suggest there would be.”

Toward the end of Clayton’s junior year, the trio decided to pursue writing a book about their findings rather than multiple academic papers.

“Amazing faculty members that they are, Yusaku and John invited me to be a co-author if I wanted to continue putting in the work. My Presidential Scholarship was over by then, so I wouldn’t get paid, but I didn’t care because the research was so interesting,” she says. “We were partners in this effort. I programmed all the surveys, did all the logistics of making them happen, and then helped with the writing, coding, editing, and pulling it all together.”

In addition to her dedication to scholarship, Clayton is a triathlete and was captain of the Dartmouth Triathlon Team, a club sport. She finished seventh in her age category at the 2017 USA Triathlon National Championship, which qualified her for the 2018 world championship, but an injury prevented her from participating. She now has her sights set on Ironman Lake Placid in July.

Come autumn, she’ll be at Stanford, starting her PhD and pursuing the career trajectory she discovered through Dartmouth’s teacher-scholars: to become a government professor.

“I have made so many close bonds with my faculty mentors, who are now my friends,” she says. “They’re models for what I want to do in life. I don’t just want to be a professor. I want to be a teacher-scholar like my mentors at Dartmouth.” 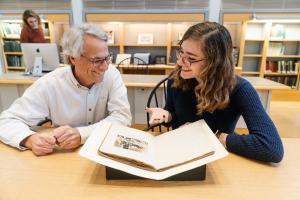 Give the gift of life-changing, faculty-mentored research to Dartmouth undergraduates.