The Call to Lead: A Campaign for Dartmouth will seek $3 billion in gifts and commitments from alumni, parents, and friends, a historic investment to elevate Dartmouth’s ambitions to make a lasting, positive impact on the world. The College is already halfway toward its fundraising target, with gifts totaling $1.5 billion from more than 78,000 donors during the past four years. Dartmouth raised $1.3 billion in its previous campaign, which ended in 2010.

“With this campaign we dedicate ourselves to building on the best of Dartmouth on behalf of humankind,” President Hanlon said. “We will help our faculty push the frontiers of human knowledge in bold new ways, broaden our undergraduate education by expanding opportunities for immersive learning, enrich the teacher-scholar model of education that defines our academic experience, and make residential life even more cohesive and generative. As a result, we will graduate students from all five of our schools who, as leaders of today and tomorrow, are prepared to confront humankind’s most pressing challenges.”

The Call to Lead will run through 2022. When fully funded, its highlights will include:

“We will make Dartmouth an even more powerful magnet for student and faculty talent, provide our students with a campus without borders, and celebrate the adventuresome, pioneering spirit that has defined Dartmouth since its founding,” President Hanlon said.

Commencing on the eve of Dartmouth’s 250th anniversary, The Call to Lead will strengthen the College’s liberal arts programs, make myriad connections across disciplines and schools, and integrate leadership development into students’ lives every day—in the classroom, in their residences, on the athletic field, and throughout cocurricular activities. Campaign initiatives will encourage students to be both learners and leaders during their time at Dartmouth, and to turn potentially life-changing ideas into reality.

Through gifts to the campaign, Dartmouth will launch a comprehensive leadership initiative to help every undergraduate develop the skills necessary to put ideas into action. This new initiative also will expand and connect existing leadership programs, such as those offered through the Nelson A. Rockefeller Center for Public Policy and the Social Sciences and Dartmouth Peak Performance, which serves varsity athletes.

“With this campaign we dedicate ourselves to building on the best of Dartmouth on behalf of humankind.”

“With The Call to Lead, we’re investing strategically in our intertwined model of teaching and scholarship, our faculty, and our students,” said Laurel Richie ’81, chair of the Dartmouth Board of Trustees and a campaign committee co-chair. “We’re going to be more deliberate, more intentional in how we prepare wise leaders dedicated to doing good. In all, we’re doubling down on our distinctive vision for what the liberal arts can deliver in a modern education.”

The campaign will invest substantially in the teacher-scholars who make Dartmouth’s distinctive model of education possible, with an emphasis on faculty recruitment, retention, and professional development—which will benefit both undergraduates and graduate students throughout their lives.

"The Dartmouth faculty has always been an extraordinary point of pride and distinction," said Board of Trustees Chair Emeritus and Campaign Executive Committee member Bill Helman ’80. "Their teaching is true to the highest standards of our educational mission, and their scholarship powerfully advances knowledge across disciplines and boundaries. So how do we get even better? By providing the resources our faculty members need to raise Dartmouth to a level unmatched by any of our peers."

Lisa Baldez, Professor of Government, and of Latin American, Latino, and Caribbean Studies, and Cheheyl Professor and Director, Dartmouth Center for the Advancement of Learning, added: “Dartmouth is already recruiting and cultivating top talent—scholars on the cutting edge of their fields who also are outstanding teachers. These strengths work together; the faculty members are constantly experimenting and bringing new ideas to their teaching. Now Dartmouth will expand and magnify this dynamic teacher-scholar model across the entire institution. That's really exciting."

“With The Call to Lead, we’re investing strategically in our intertwined model of teaching and scholarship, our faculty, and our students.”

- Laurel Richie ’81, chair of the Dartmouth Board of Trustees

An evening of historic announcements

On Friday, President Hanlon announced a major gift from Frank Guarini ’46 to strengthen and expand the graduate school, created by Dartmouth trustees two years ago. The school—now officially the Frank J. Guarini School of Graduate and Advanced Studies—currently serves more than 1,000 master’s students, PhD candidates, and postdoctoral scholars who are pursuing degrees and conducting research in 35 programs. With this gift, the school will broaden its academic and professional development support for all graduate students and heighten Dartmouth’s ability to respond nimbly to opportunities offered by emerging disciplines.

President Hanlon unveiled a series of philanthropic initiatives driven by women in the Dartmouth community. In 2014, a group of alumnae created the Centennial Circle, an organization devoted to expanding the availability of financial aid to female students through the Dartmouth College Fund. The Centennial Circle has been so successful—raising more than $30 million and redefining how women can be leaders in higher education philanthropy—that Dartmouth women have committed to three ambitious targets:

President Hanlon also announced a $5 million gift from Karen and Jim Frank ’65—with an additional $1 million dollar-for-dollar match challenge—to support students who lack the resources to study abroad. More than 55 percent of all Dartmouth undergraduates study abroad, the highest rate in the Ivy League. Each year, however, scores of undergraduates who want to study in another country simply cannot afford the additional costs associated with living and travelling overseas.

The liberal arts and experiential learning

Campaign Co-Chair and Trustee Greg Maffei ’82 said Dartmouth’s renowned liberal arts experience will be fundamental to every element of this historic campaign.

“Regardless of their major or career aspirations, our students will leave Dartmouth as broadly educated people who can think creatively and analytically, communicate confidently, and work across disparate cultures effectively,” he said. “We often talk about Dartmouth as a place of ‘and’ —for example, both an intimate liberal arts college and a powerful research university. This is one more attribute that sets Dartmouth apart: our time-tested method of teaching, informed by cutting-edge scholarship, is the best launching pad for leaders who will tackle tomorrow’s greatest challenges.”

In the tradition of John Kemeny and John Sloan Dickey, two 20th-century presidents of Dartmouth who encouraged faculty and students to think and act boldly, The Call to Lead will support opportunities for students to engage in experiential learning. Unlike at most universities, Dartmouth encourages undergraduates to participate in groundbreaking faculty research, become entrepreneurs, and even author papers that appear in scholarly journals. Sixteen percent of undergraduate students participated in research in 2017 that led to them authoring or coauthoring an article published in an academic journal; the College is aiming to double that number.

Recent examples of students conducting research and driving innovation include:

Gifts of all types drive transformation

Friday’s campaign launch was built on a foundation of four years of record-setting fundraising under President Hanlon—and giving of all varieties will be essential to the campaign’s success. The $3 billion fundraising target includes $250 million in bequests and $478 million in giving to all of Dartmouth’s annual funds (including the professional schools and graduate school). To date, the campaign has received gifts of $250 or less from more than 20,000 donors, totaling nearly $2.2 million.

President Hanlon said the campaign’s reach will be broad, deep, and transformational, both on the Dartmouth campus and far beyond Hanover.

“There is unprecedented demand for problem-solvers who can step up and serve humankind—broadly educated men and women who can create meaningful change,” said President Hanlon. “Through The Call to Lead, we will strengthen our ability to educate future leaders who possess an array of cross-disciplinary skills and an unrivaled ability to study complex problems from multiple perspectives.”

Ellie Loughlin ’89, a campaign co-chair along with her husband, Phil Loughlin ’89, said the fundamental goal of The Call to Lead is to ensure students and faculty can realize their full potential, so they can make positive change—in their community or around the world.

“As alumni and as parents of two Dartmouth students, Phil and I have seen firsthand the amazing transformations taking place on campus while the College remains firmly dedicated to its heritage and its remarkable liberal arts roots,” she said. “Ultimately, The Call to Lead is about taking smart, driven thinkers and doers and immersing them in an environment—and a community—where they can grow, flourish, and achieve more than they could have dreamed.”

Learn about the Strategic Priorities

Alumni and friends already have made $1.5 billion in gifts and commitments toward the campaign goals. Highlights of this generosity include:

We’re taking the campaign celebration on the road this fall to reach as many alumni, parents, and friends as we can! Look for details soon on events in the following cities:

“Ultimately, The Call to Lead is about taking smart, driven thinkers and doers and immersing them in an environment—and a community—where they can grow, flourish, and achieve more than they could have dreamed.” 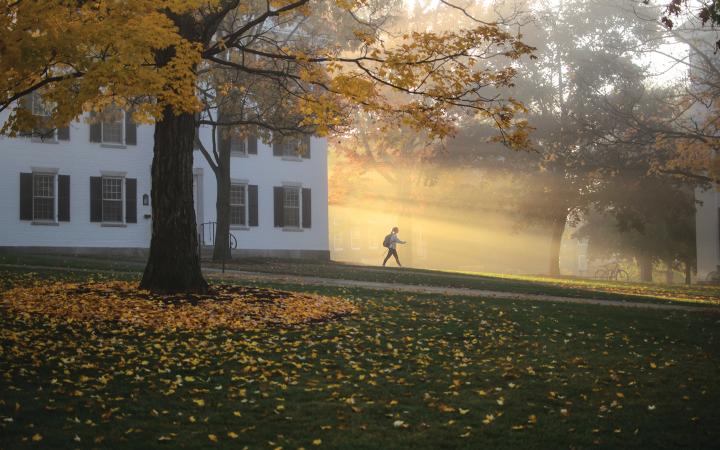