Dartmouth College students discover a fossilized piece of bone likely to have come from a 2-million-year-old ancestor. 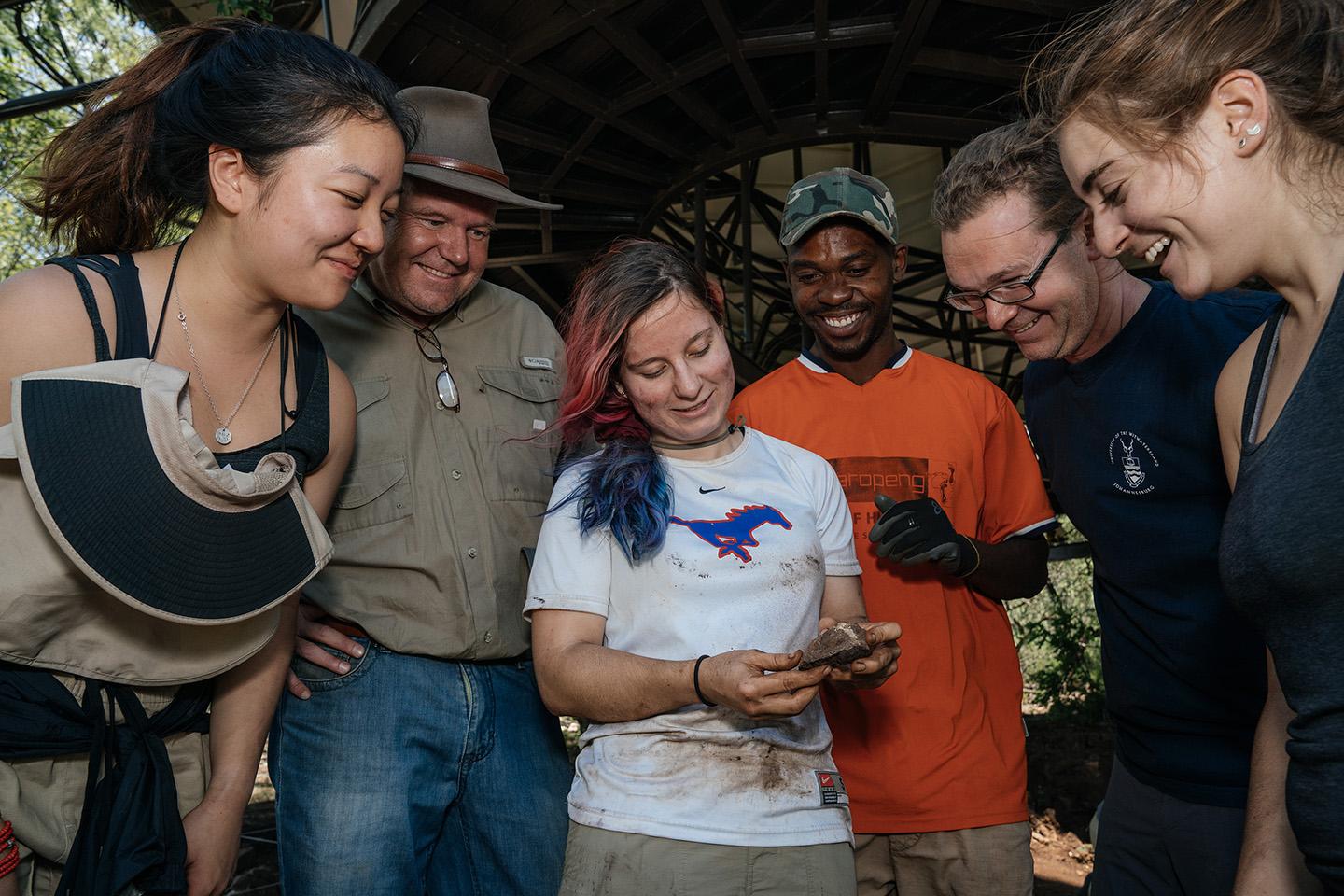 It’s not every day that a couple of college students discover a fossilized piece of bone likely to have come from a 2-million-year-old ancestor. But that’s what Keira Byno ’19, Julia Cohen ’18, and Kathleen Li ’17 did this winter during a three-week field trip to South Africa for their anthropology class, “Experiencing Human Origins and Evolution.”

Excavating at a UNESCO World Heritage site at Malapa, northwest of Johannesburg, with 12 other Dartmouth anthropology students, Associate Professor Jeremy DeSilva, and Professor Nathaniel Dominy, the novice anthropologists were expecting to learn a lot. They were not expecting to make an important contribution to science.

“Out of every fossil that’s found, there’s a one-in-250,000 chance that it’s early human. The fact that we found a fossil is amazing. But finding this fossil, out of sheer luck, was incredibly exciting,” says Cohen.

Experts believe that what Cohen, Byno, and Li uncovered at the site known as the “Cradle of Humankind” are fossilized fragments of the pelvis of Australopithecus sediba, whose features—upright walking, for example—mark it as a precursor of humans.

Cohen and Li found the rock within the roped-off square of land they were assigned to excavate, under a dome-like structure that provides shade and partial shelter from rain and wind. Their job was brushing away the soil. “Julia and I got really lucky and picked a good square, so we brushed off the first layer and then we handed it off to the team Keira was on at that moment,” Li says.

Meanwhile, Byno was at the sifting station, working with an experienced staffer from the site. “I found these two large chunks,” she says. “The first one just looked like dirty rock, but I scrubbed, and it was immediately obvious that there was a fossil in there.”

Her excited co-worker told her to show it to DeSilva and fellow paleoanthropologist Lee Berger, who discovered Australopithecus sediba in 2008. Berger is a research professor at the University of the Witwatersrand in Johannesburg and an explorer-in-residence at the National Geographic Society.

“So I showed it to them,” Byno recalls, “and they’re like, wow! Everyone was so excited, and they said this is definitely hominid!”

The pelvis theory took hold when, moments later, Byno made another astonishing discovery.

“I was holding onto this other rock that I had picked up, that I hadn’t cleaned yet, so I went back to the sift station and started cleaning that one. And it was immediately obvious that this was the exact same thing.”

To her amazement, the staffer she was working with was able to click the fragments together, like two puzzle pieces—of one pelvis.

The sound of the click was “incredible,” Byno says.

Eventually, a replica of this piece will find its way into a model of the female Australopithecus sediba standing just inside the door of DeSilva’s lab at Dartmouth. Copies of bone pieces that have been found make up less than half of the skeleton. Missing pieces are represented by plaster parts based on what DeSilva calls “educated guesswork.” He says this latest find, if it is pelvic bone, will provide valuable clues about how Australopithecus sediba moved, and how it gave birth.

“You can see for yourself how many pieces of this creature have been found, and now we have one more. That allows us to fill in the blanks,” says DeSilva. “But we are not a science of just filling in blanks; we are a science of trying to reconstruct what our ancestors were like.”

This is not the first time DeSilva has participated in a significant fossil find. In September 2015, he was part of an international team of more than 60 scientists, led by Berger, who discovered more than 1,600 fossils of a new human ancestor, Homo naledi, in Rising Star Cave, which is within the “Cradle of Humankind” site.

While their discovery in Malapa isn’t on the scale of the now world-famous one in Rising Star Cave, contributing new knowledge about human origins is something these students say they will never forget.

“It’s something I hold dear to my heart,” says Cohen. “It shows the importance of being out in the field. Of getting your hands dirty. In one day, we learned how this one piece of bone can contribute to our entire human lineage.”

“I’m sure they had this experience, too, this feeling I had, about this creature—that she was alive, 2 million years ago. She was alive, walking around, eating, breathing, thinking, laughing, crying. I don’t like to get too corny, but these are gifts. These are amazing gifts that these creatures have left us. They have given us evidence of where we came from.”