With the generous support of donors, Dartmouth rowers can now train on moving water year-round 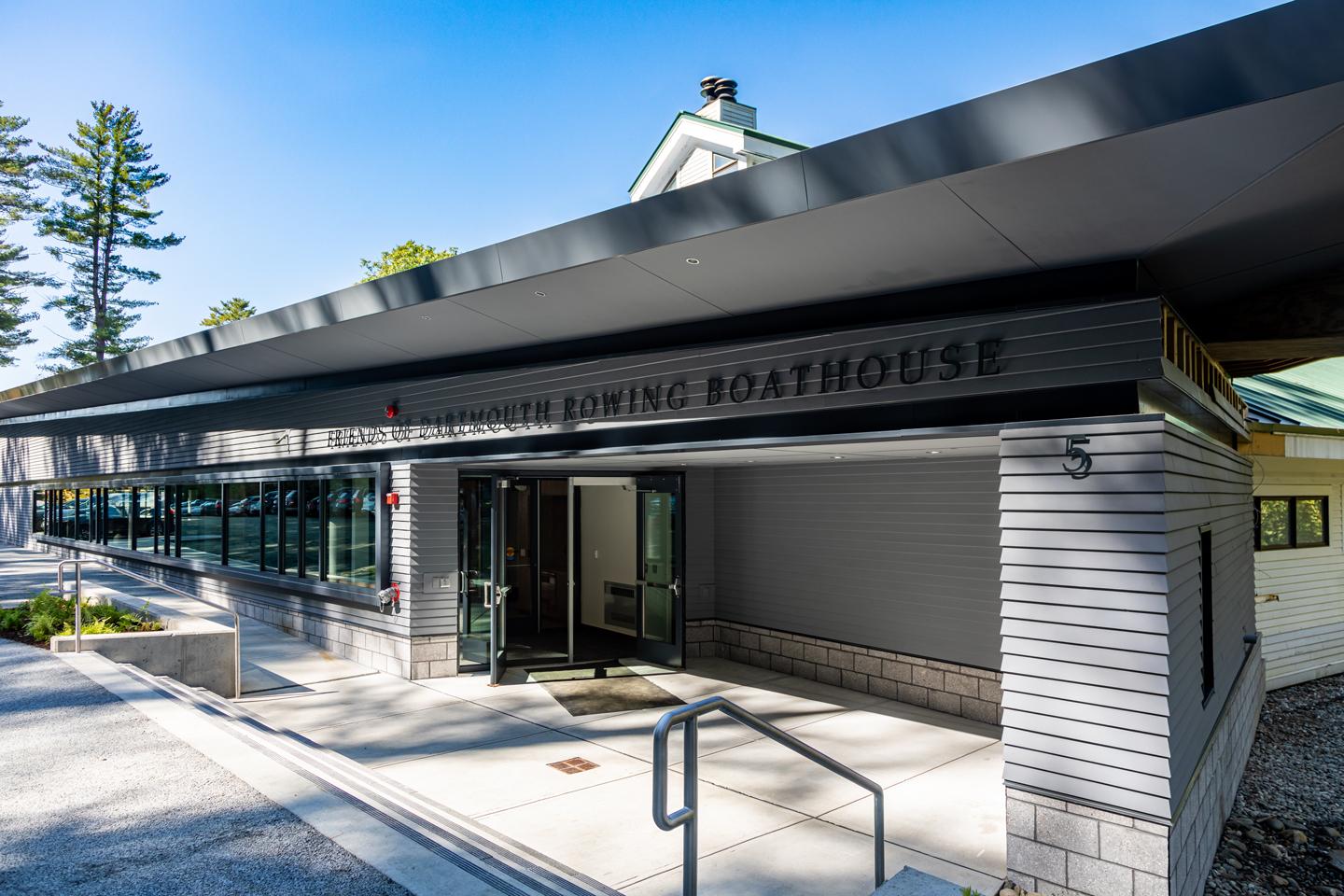 In late September, more than 400 students, alumni, and parents celebrated the dedication of a state-of-the-art addition to the Friends of Dartmouth Rowing Boathouse, a major expansion that will allow rowers to train in moving water year-round and strengthen Dartmouth’s ability to recruit topflight talent.

Alumni rowers and dedicated rowing enthusiasts generously provided the full $7.5 million for the addition and an endowment for its ongoing operation and maintenance. 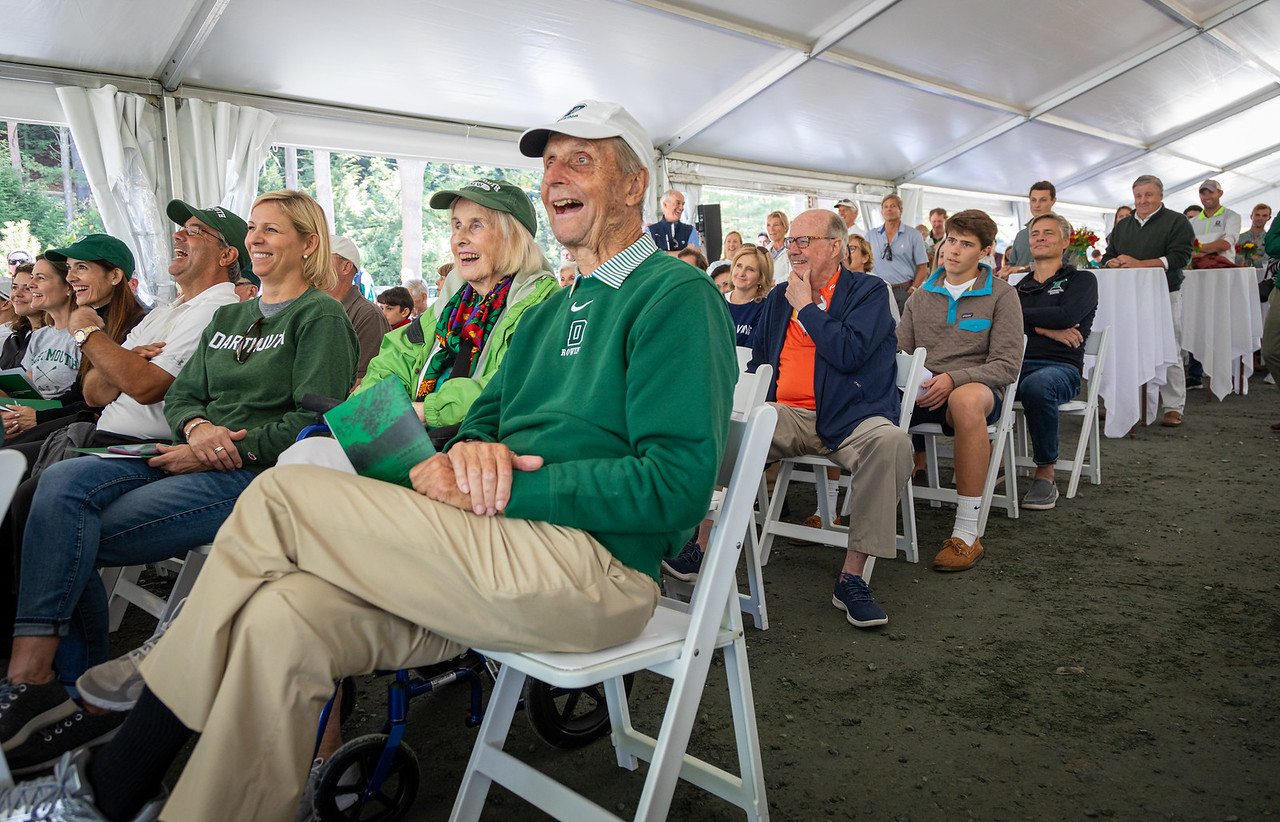 The 6,400-square-foot addition features two moving-water tanks that simulate rowing on water, which will better prepare Dartmouth rowers for the start of the spring rowing season in February—a time of year when rowers at many other universities are already practicing on open water, but the Connecticut River is still covered by ice.

“Between the renovated Friends of Dartmouth Rowing Boathouse, this new addition with the moving-water tanks, and the beautiful river that we row on—and having all of this right on campus—we now have one of the finest collegiate rowing facilities in the U.S., if not the finest,” said Wyatt Allen, the Betsy and Mark Gates 1959 Head Coach of Men’s Heavyweight Rowing.

The men’s heavyweight team finished tenth nationally in 2018, and many alumni and parents who attended the dedication ceremony predicted that the new facility will make Dartmouth even more competitive.

“There has always been a certain pride among rowers about being ‘Dartmouth tough.’ But the sport has become so much more competitive in the past 20 years that the lack of water time has become a real disadvantage,” said Bill McNabb ’79, a member of the Dartmouth Athletics Advisory Board who rowed as an undergraduate. “This is a game-changer for us. This facility is going to allow us to be much more competitive at the very highest levels.” 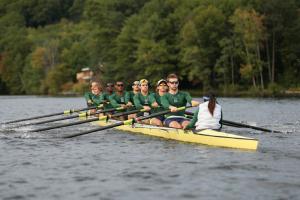 Support our rowers by giving to the Friends of Dartmouth Rowing. 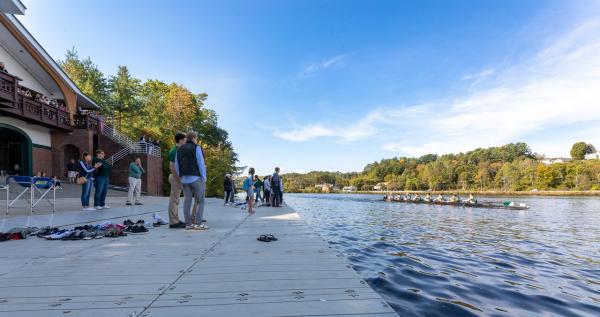 The difference between the best and very good

The opportunity to improve each rower’s technique on moving water will be one of the major benefits of training with the tanks.

“Technique can be the difference between the best crews and very good crews,” said Trina Santry, ’80 TU’87, who rowed as a student and is the mother of a current member of the men’s heavyweight team. “We’ve always said Dartmouth rowers are in the best shape, but they don’t get as much time on the water to work on technique. The moving-water tanks will enable the team to spend more quality time on technique and fine-tune their rowing together.”

The combination of the boathouse addition and an outstanding stretch of flatwater—the Connecticut River as it flows past Hanover is one of the nation’s premier rowing destinations from late spring through early fall—will make Dartmouth an even more attractive choice for talented young rowers, said Andre Hunter ’83, chair of the Friends of Dartmouth Rowing. “We saw heightened interest when this project was announced. This is going to make a tremendous difference in our ability to recruit outstanding rowers.”

Approximately 120 athletes row during the spring and fall seasons as part of Dartmouth’s three varsity teams—one for women and lightweight and heavyweight crews for men. With the opening of the addition, members of all three teams for the first time will be able to train simultaneously.