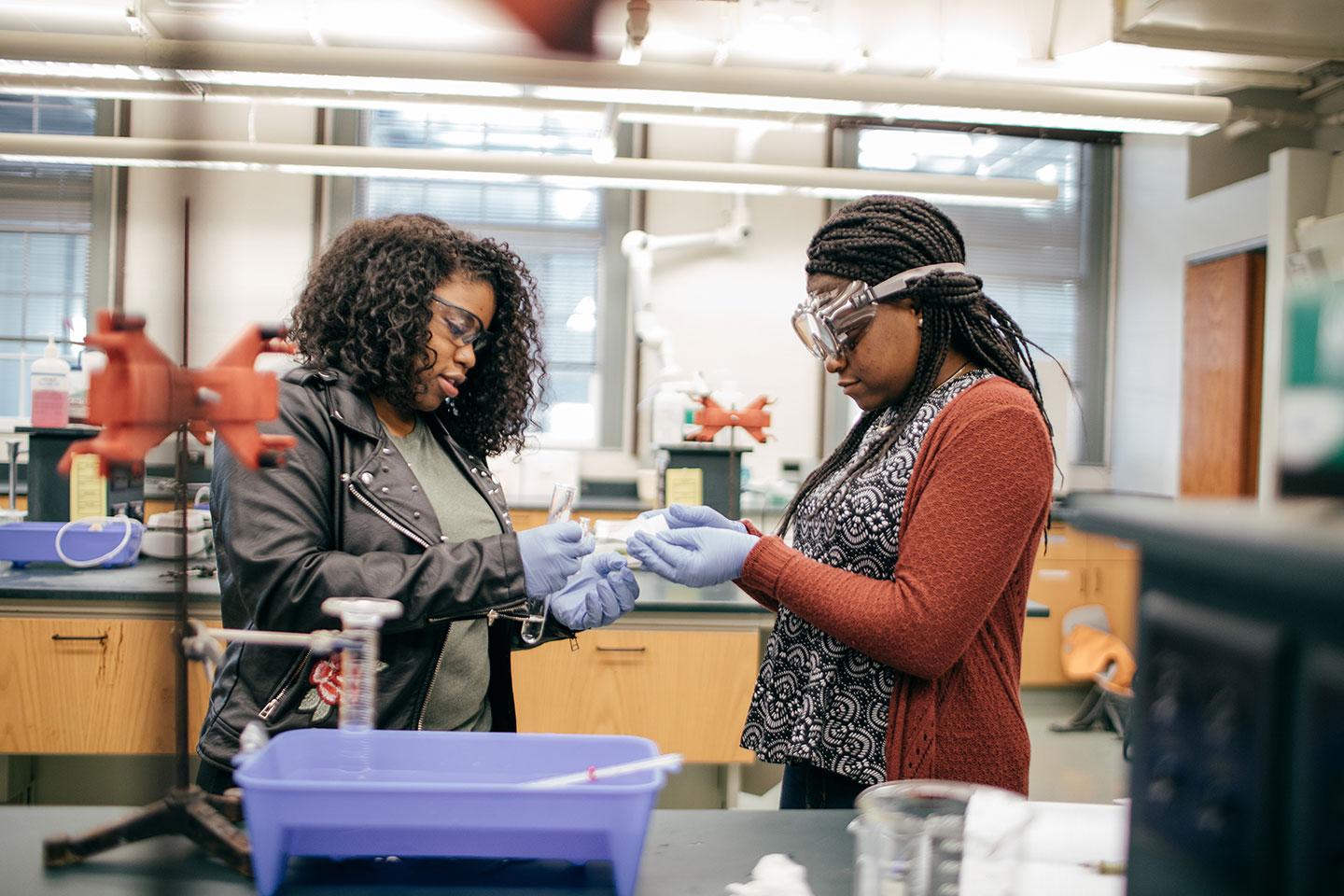 A $150,000 gift from Merinda and Ben Wilson ’73 has launched Dartmouth’s effort to support students from groups that have been underrepresented in science, technology, engineering, a mathematics (STEM) disciplines, President Philip J. Hanlon ’77 announced Friday.

As part of The Call to Lead campaign, Dartmouth is aiming to expand and permanently endow the E.E. Just Program, which provides mentorships, research internships, and undergraduate fellowships to these students.

“Humankind has never needed brilliant young minds in the sciences, technology, and math more than today—and each of these disciplines demands broadly educated, creative professionals who reflect the diversity of our global society,” said President Hanlon. “If diversity in the sciences matters deeply to you, I encourage you to join in this effort.”

The program—named in honor of Ernest Everett Just, a valedictorian in the Dartmouth Class of 1907 and a pioneering African American cell biologist—is demonstrating tremendous promise. More than 85 percent of the undergraduates who participated in the E.E. Just Program’s most recent cohorts graduated with a STEM degree—twice the typical rate for students from underrepresented populations who arrive at Dartmouth interested in studying STEM.

Dartmouth is now seeking to provide a permanent, dedicated source of funding for the program with a $10 million endowment.

“Merinda and I are honored to invest in the future of the E.E. Just Program, which has already benefited so many students,” said Wilson, a member of Dartmouth’s Board of Trustees. “In the truest Dartmouth tradition of expanding accessibility and inspiring future leaders, we want to ensure that all students are supported and mentored as they pursue their academic passions.”

Providing the resources to support undergraduates who are pursuing STEM degrees is a concern at colleges and universities across the country. A recently published paper in the journal Educational Researcher reported that among undergraduates who have declared as STEM majors, nearly 40 percent of minority students switch majors, compared to about 30 percent of white students.

Testimonials to the Program’s Effectiveness

Overseen by a part-time director and a select number of faculty advisers, the E.E. Just Program provides undergraduates with opportunities for intellectual engagement and professional development within a close-knit community of Dartmouth scientists.

The program offers participating undergraduates a sense of belonging, withfaculty serving as mentors as they introduce students to research experiences. The program also links undergraduates with graduate students and postdoctoral scholars who have similar backgrounds and can serve as role models.

Juliana Murcia-Montoya ’19,a neuroscience major from Schenectady, New York, said participation in the E.E. Just Program enabled her to participate in research during her first term at Dartmouth and eventually to work full-time in a research lab during an off term.

“Being part of this lab has truly helped me advance in my career outside of any academic accomplishments,” said Murcia-Montoya. “This was only possible because of the help of one of my mentors and the funding that this amazing program has been able to provide me. Not only has E.E. Just encouraged me to pursue an MD/PhD when I graduate from Dartmouth, but this program has also helped me find a greater purpose by being a mentor.”

An E.E. Just Program alumnus, Jalen Benson ’17, said the program was central to his Dartmouth experience.

“Coming to Dartmouth was exciting but also a huge jump for me. I was the first in my family to go to college and, unlike many of my peers in the sciences, I didn’t have an idea what research was,” said Benson, now a research assistant at the Stanford University School of Medicine, in the Department of Thoracic Surgery, who will enter Harvard Medical School in the fall. “Fortunately, I became a member of the E.E. Just Program my freshman year. At one of the program’s events, I heard Dr. Elaina Melton give a talk about her research and her journey in science. She did research in atherosclerosis and was willing to give me a chance to do research under her. I completely fell in love with the work I did in that lab, and I worked in the lab every following term while still at Dartmouth.”

In his sophomore year, Benson attended a talk given by Andrea Hayes-Jordan ’87 MED’91 at the E.E. Just Symposium. With support from the program, he later spent an off term working for Dr. Hayes-Jordan at the MD Anderson Cancer Center in Houston and co-authored two papers from his time there.

“The E.E. Just Program gave me the support and network that I needed to succeed in research and medicine,” Benson said.

Impact of the Campaign Investment

Dartmouth’s vision for expanding the E.E. Just Program will require an annual operating budget of $445,000, more than double the existing budget. Endowed funds will provide long-term sustainability, ensure robust programming and research opportunities, and ensure the continued engagement of graduate students, postdoctoral fellows, and faculty members in all aspects of the program.

“On behalf of the E.E. Just community, I thank Merinda and Ben Wilson for launching the effort to endow the E.E. Just Program,” said Craig Sutton, associate professor mathematics and the program’s director. “Reaching our target will ensure the program can continue to honor the legacy of E.E. Just by providing future Dartmouth students with the mentorship, scientific training, leadership development, and inclusive community that will form the foundation of their future success.”

A Rufus Choate Scholar, E.E. Just graduated with honors in botany, sociology, and history. Immediately after receiving his degree at Dartmouth, he taught at Howard University in Washington, DC, for several years, and conducted research at the Marine Biological Laboratory in Woods Hole, Massachusetts, in the summer. Earning a doctorate from the University of Chicago, he became a leading scholar in understanding the role of the cell surface in the development of organisms.

To learn how you can support the E.E. Just Program, please email calltolead@dartmouth.edu.