Intellectual Property, Trademarks, and the Law 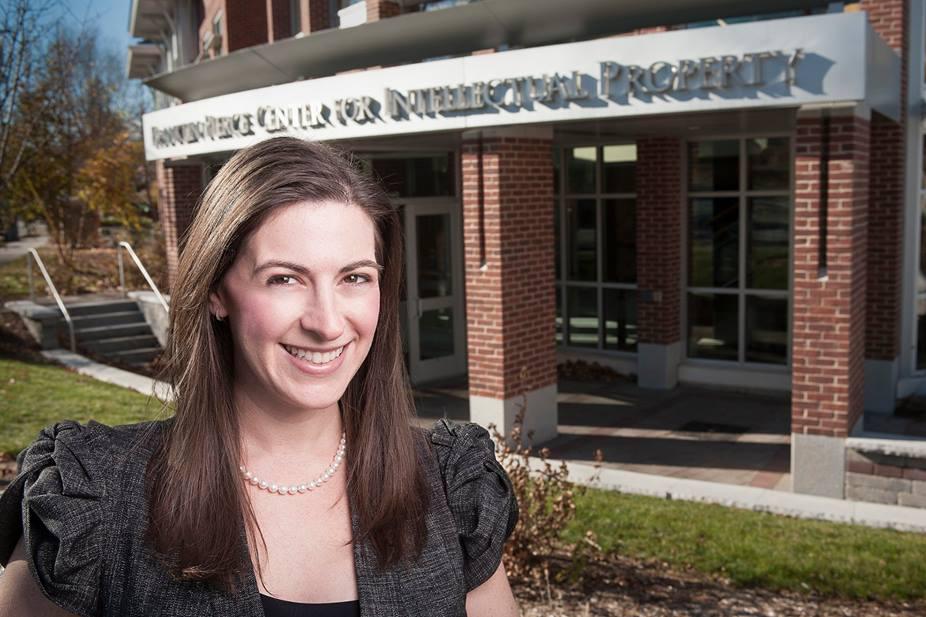 Alexandra J. Roberts ’02 is an assistant professor at the University of New Hampshire School of Law. She teaches and writes in the areas of intellectual property, trademarks and unfair competition, entertainment law, and law and literature. The English major also serves on Alumni Council as the Class of 2002 representative. You can learn more about Roberts on her faculty website and follow her on Twitter at @lexlanham.

Was there a course at Dartmouth that helped you on your path to becoming a lawyer?
Just about every English class I took, from creative writing to theory to my freshman seminar on "Reading Popular Culture" with Alexandra Halasz, honed my analytical skills and placed me on the path to eventually becoming a law professor. The thesis I wrote with Ivy Schweitzer on the poetry of Adrienne Rich enabled me to take on a substantial academic project and engage with texts in a sustained way, and discover how much I enjoyed doing it. And my role as English major liaison, and my overall idyllic experience as a student at Dartmouth with incredible teachers and mentors, made me want to join that club by becoming an academic. I didn't take a lot of the courses that future lawyers take, but I built a foundation in my English major that served me well as a law student and litigator, and in particular as a trademark lawyer. Trademark law is all about words and how they resonate with people, and how they function as communicative and expressive tools, so it has many of the same building blocks as literature and literary criticism.

You’re a prolific user of Twitter and you've written a BuzzFeed article about trademarking hashtags that was both a lot of fun and genuinely informative about legal issues. How is intellectual property and trademark law changing to accommodate all of the rapidly developing technology and sharing tools we have now?
Trademark law is fighting an uphill battle to keep pace with changes in technology and, maybe more crucially, changes in the way that people interact with that technology and the way they understand brands' use of trademarks in those spaces. Consumer perception lies at the heart of most trademark doctrines, and yet consumer perception is not only difficult to gauge, it's always a moving target. When you see a hashtag on a company's website, do you understand it as a tool for tagging and finding content on social media or as a source indicator associated with that company and its products? When brands rely heavily on consumer-generated content, can they take credit for creating value and imbuing their mark with meaning, or do the consumers who did the work have some stake and claim in the value that results? When a phrase is trending on social media, like "nevertheless, she persisted" or "tbt," and a company decides to start using it as a trademark for wine or shirts or cookies, will people ever actually understand it as a trademark? These are questions about IP [intellectual property] law but they're also questions about pop culture and consumer psychology and how the meanings of words and phrases evolve. It's incredibly hard for the law to keep up, especially given how rarely these issues work their way up to federal courts.

You were an English major at Dartmouth, and in addition to your law degree from Yale, you also have a master’s degree in English from Stanford and still write poetry. How does the more literary side of you feed into your legal work?
Statutes and case law and commentary are texts, and trademarks are (tiny) texts. Reading and writing poetry armed me with the skills and vocabulary to engage with those texts seriously and playfully and approach them from a variety of angles. I bring that background to the classroom as well as to my writing. At the same time, only so many people read and think about poetry and only so many poems have broad impact. Law affects everyone, and its impact is inescapable. I have written a few articles about law and literature and thought about different ways to incorporate poetry into the law school curriculum, as a way to build empathy and get students thinking in different ways about the material they're studying. This semester, I taught several cases about the Federal Trademark Act's ban on marks that are disparaging to a particular group of people and encouraged the students to consider whether the prohibition on registering disparaging marks runs afoul of the First Amendment, an issue currently before the Supreme Court. We at UNH Law were extremely fortunate to be able to host Simon Tam and his band The Slants, whose trademark status is at issue in the Supreme Court case. As a companion to that case and a line of cases about the Washington Redskins team name and whether its federal trademark registration should be canceled as disparaging, I assigned a poem by Layli Long Soldier called "38," about "thirty-eight Dakota men who were executed by hanging, under orders from President Abraham Lincoln." It's a gut-wrenching piece that forces students to look up from the textbook and consider the prohibition on the federal registration of disparaging marks in the context of this country's ongoing violence against Native Americans.