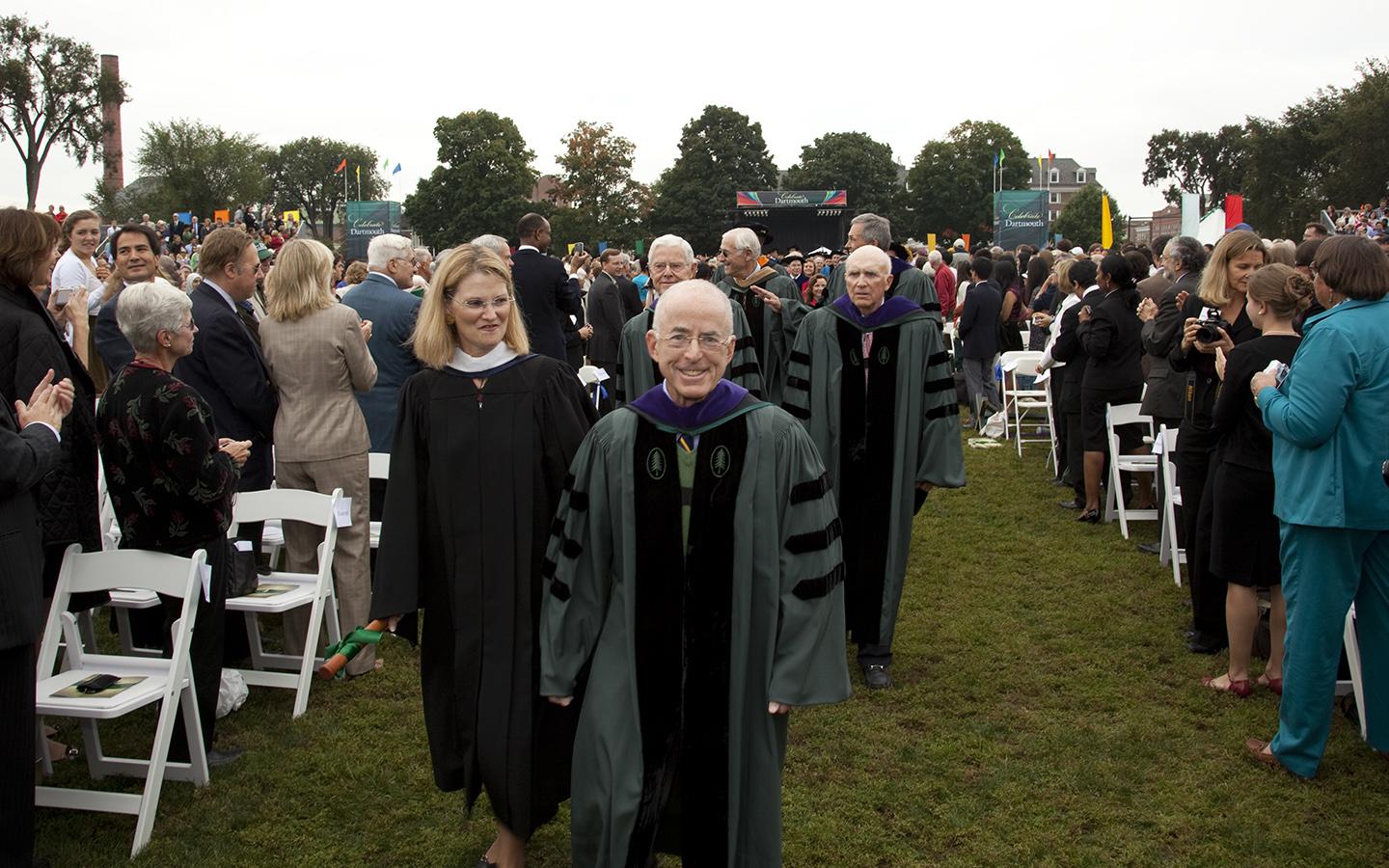 Dartmouth today announced it will endow, expand, and name its globally recognized foreign relations fellowship program in honor of John Rosenwald, Jr. ’52 TU’53 H’02, chair emeritus of the Dartmouth Board of Trustees and counsel to generations of Dartmouth leaders.

The postdoctoral fellows program, piloted in 2012 with grant funding from the Carnegie Corporation of New York, brings to Dartmouth leading young scholars who are working on pressing, complex international security questions.

Rosenwald’s friends and classmates have led a quiet campaign to raise $12 million to endow the program in tribute to his 70 years of leadership and service to Dartmouth.

“I have the privilege of being the seventh Dartmouth president to benefit from John Rosenwald’s wisdom, not to mention his boundless energy. Since the earliest days of my administration, I’ve turned to Rosie for counsel, and he has always made time to share his insights and observations,” says President Philip J. Hanlon ’77. “On behalf of all of us in the Dartmouth community, I’m delighted to name our prestigious foreign policy and international security fellows program in honor of this exceptional son of Dartmouth.”

Rosenwald, who turns 91 on Friday, and his late wife, Pat, provided the first funding to endow the fellowship program at Dartmouth. Long interested in foreign affairs, he advised on the initiative’s start-up, sharing his organizational and promotional expertise with the program’s faculty and staff.

“John Rosenwald is one of this country’s wise men, one who has dedicated his life to service in both the private and public sectors,” says Dr. Richard N. Haass, president of the Council on Foreign Relations. “Our nation, our economy, our society, and countless institutions, including my own, where he has been an active member for more than 20 years, are stronger thanks to John’s guidance and support.”

A Distinctive Program with Global Reach

“In the 21st century, the challenges to international security are urgent, multi-disciplinary, and complex,” says Victoria Holt, incoming director of the John Sloan Dickey Center for International Understanding, where the program is housed. “This fellowship program complements Dartmouth’s distinctive undergraduate War and Peace program and its deep bench of faculty expertise in government and history. At this critical moment, Dartmouth will lead, deepening its high-impact, policy-relevant research and strengthening its role in preparing future generations of foreign policy leaders.”

The program annually selects leading postdoctoral scholars—most of them political scientists and historians—who study topics in foreign policy and international security related to one of the Dickey Center’s research areas. Admission to the program is highly competitive; since its inception, an average of 114 young scholars have applied each year for up to eight positions.

“Nurturing the intellectual vitality and impact of our faculty is important at an institution such as Dartmouth. This fellowship program excites our faculty colleagues and introduces us to the next generation of academic talent, scholars who are conducting research and informing policy on volatile issues facing the world today,” says Elizabeth Smith, dean of the Faculty of Arts and Sciences.

Daryl Press, the program’s coordinator and an associate professor of government, says the fellows program is essential to Dartmouth’s success in these areas.

“Dartmouth’s niche in the field of international security lies in the connection of rigorous academic research applied to crucial policy-relevant topics,” he says. “Our postdocs bring new ideas and perspectives to Dartmouth each year. Mentoring them, and learning from them, makes us better researchers and teachers. The program has absolutely energized the intellectual environment in international relations at Dartmouth.”

In addition to contributing to Dartmouth’s academic vibrancy, fellows in the program deliver guest lectures in undergraduate courses, interact with high-level visitors from the policy world, participate in current debates through opinion pieces and op-eds, and act as change-agents in the scholarly community, bringing new and urgent concerns to the forefront of existing faculty inquiry and research. They mentor undergraduates interested in advanced study, research, and public policy engagement.

Later, as academics, policymakers, and government leaders, the fellows expand Dartmouth’s international network of foreign relations professionals who can consult and advise faculty, mentor future generations of young scholars, and often provide internships and employment for Dartmouth students and alumni. Dozens of fellows in the program have been recruited to tenure-track positions at U.S. universities, including two at Dartmouth.

The Rosenwald Fellows Program is a crucial component of Dartmouth’s plan to establish an Institute for Global Security, which will amplify the College’s leadership in research, teaching, and policy engagement on the world’s pressing security issues. The institute, also priority of The Call to Lead campaign, will propel Dartmouth to new levels of excellence by creating pathways for connection with distinguished scholars and practitioners from around the globe, raising Dartmouth’s profile and influence in foreign policy circles and inviting opportunities for research collaboration between faculty and students.

The institute is a direct response to President Hanlon’s call for interdisciplinary, intergenerational centers of excellence that shape solutions to global challenges and build on existing areas of distinction. Like the Rosenwald Fellows Program, the center will embody the best of Dartmouth’s teacher-scholar model, linking scholarship, teaching, and undergraduate experiential learning with the policy world.

Rosenwald is vice chairman emeritus of JPMorgan Chase, joining the investment bank after five decades at Bear Stearns. Among his many responsibilities at both financial firms, he was the lead relationship manager for several top clients around the world.

Rosenwald’s record of service and leadership at Dartmouth as an alumnus is unsurpassed. Starting upon graduation as an alumni class agent, he has held many leadership roles at Dartmouth, including service on the board of trustees from 1986 to 1996, the final three years as chair. He led Dartmouth’s Will to Excel campaign, which concluded in 1996, and was a vice chair of the $1.3 billion Campaign for the Dartmouth Experience, which ended in 2009. Rosenwald is a member of the Hal Ripley Society, with an unbroken 69 years of support of the Dartmouth College Fund.

In New York, Rosenwald is recognized as one of the most influential philanthropists and fundraisers in the city’s history. Through the decades, he has personally raised more than $3 billion for an array of worthy causes, including the Central Park Conservancy, Deerfield Academy, the Environmental Defense Fund, the John F. Kennedy School of Government, and NYU Langone Health, and he was one of the galvanizing forces behind creation of the 9/11 Memorial and Museum in New York. In recognition of his philanthropy and volunteer work, Rosenwald has received numerous awards and accolades. Among them, the New York Landmarks Conservancy honored him as a Living Landmark.

Trustee Emeritus Russell Carson ’65 H’15, who served on the boards of the Metropolitan Museum of Art and the 9/11 Memorial and Museum with Rosenwald, describes him as an unsurpassed champion for education and culture.

“John is a force of nature. He’s a totally unique individual who possesses boundless intellectual curiosity, an egalitarian approach toward all, and an amazing array of one-liners,” says Carson. “It’s fair to say that if John’s not the best fundraiser in the world, he’s certainly one of the top fundraisers in the world. Nobody in New York comes close to John.”

Trustee Emerita Peggy Tanner ’79, who served on the Will to Excel Campaign Executive Committee with Rosenwald and continues to turn to him for fundraising advice, praises him for his leadership skills, humility, and mentorship.

“Rosie is a dynamo with the most engaging, loving personality, a quick wit, and indefatigable energy. ‘Rosie’s Rules’ are the gold standard for effective fundraising. My favorite: ‘Don’t give till it hurts, give till it feels good,’” she says. “One of life’s great joys is joining Rosie at a New York restaurant. From the moment you enter, you realize you are in the presence of a rock star. Everybody knows Rosie, from the busboy to the maître d’, the wait staff, and most of the customers. He treats everyone like family.”

Rosenwald’s interest in the wellbeing of students was a hallmark of his tenure as board chair at Dartmouth. Rather than making a beeline to Parkhurst when visiting Hanover, he always heard from students first, recalls Steven Roth ’62 TU’63 H’12, a trustee emeritus.

“My daughter, Amanda ’93, was Queen Arthur—the equivalent to president—of Casque and Gauntlet senior society,” says Roth. “As board chair, John came to campus monthly. He would arrive, drop his bag at the inn, and immediately cross the street to Casque and Gauntlet, where Amanda had gathered student leaders, so John could debrief and download what was going on from students’ point of view. His first night on every visit was spent hearing from students—such was his management style.”

Robert Harteveldt ’84 says Rosenwald has been his mentor since 1982, when he started as a summer intern at Bear Stearns, where he worked for 24 years. He says Rosenwald’s impact on Dartmouth is “greater than we’ll ever know” because he has never sought recognition for his volunteer work on behalf of Dartmouth or the Tuck School of Business.

“What motivates Johnny is his sincere desire and commitment to help others,” says Harteveldt. “No conversation ends without him saying, ‘Is there anything that I can do for you?’ Many people say, ‘What can I do to help?’ and they don’t follow through. Johnny always follows through. He has helped countless people and never asked for anything in return. He is the most selfless and charming person that I have ever known.”

The organizing committee that planned today’s virtual tribute included friends and associates from within and beyond the Dartmouth community, including Judy and Russ Carson ’65 and Cecily Carson ’95; Barbara and Brad Evans ’64; Jerry Goldstein ’54; Kristy and Robert Harteveldt ’84; Sally and William Neukom ’64; Lawrence and Lucy Ricciardi; Daryl and Steven Roth ’62, Tuck ’63; Holly Hagens and Todd Sisitsky ’93; Peggy Epstein Tanner ’79 and David Tanner; and Diana Taylor ’77 and Michael R. Bloomberg. Cynthia and David Edelson ’81 and Karen and Joe Niehaus ’85 have generously endowed individual fellowships in the program.

The organizing committee’s efforts have secured $11.1 million toward The Call to Lead campaign goal of $12 million. Individuals interested in supporting the Rosenwald Fellows Program tribute may contact the Dartmouth Advancement office.

The E. John Rosenwald, Jr. Fellows Program in U.S. Foreign Policy and International Security is a priority of Dartmouth’s $3 billion The Call to Lead campaign, which is helping prepare future generations of Dartmouth graduates for lives of leadership and impact. Generous financial support from more than 50,000 alumni, parents, and friends has produced $2.8 billion to date in critical investments in academic excellence and student access.