Exploring Applications of Technology in Health and Wellness 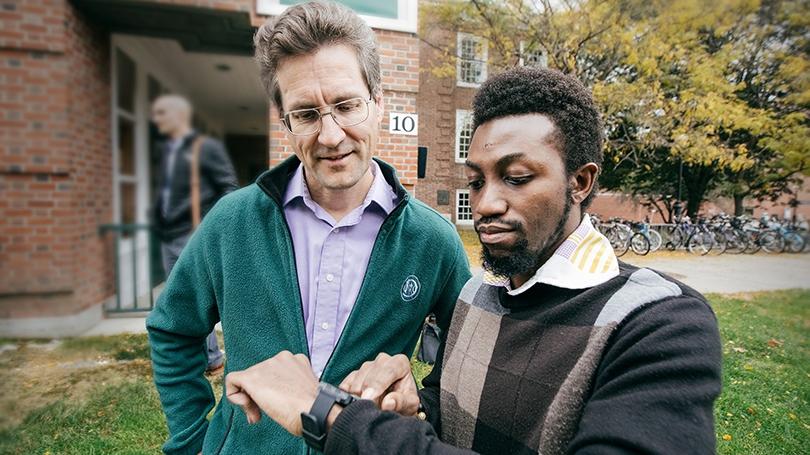 George Boateng ’16, Thayer ’17, arrived at Dartmouth in 2012 with an agenda. He had come 5,000 miles, seeking ways to make a difference in education and health in the developing world—in his native Ghana, in particular.

At Dartmouth, he gained hands-on experience in computer science and engineering in a place where his work had the potential to produce real-world applications. Boateng proceeded to blaze a trail marked by accolades for his research and recognition for his humanitarian accomplishments. Most recently, he won Dartmouth’s Martin Luther King Jr. Social Justice Award for Emerging Leadershipfor his work as co-founder and president of the nonprofit Nsesa Foundation.

“ ‘Nsesa’ literally means ‘change’ in the Ghanaian language, Akan,” says Boateng. “Our vision is to spur an innovation revolution—a movement in which the youth across the length and breadth of Africa are developing innovative solutions to problems in their communities using STEM.”

“I was so pleased to hear that George had won the Martin Luther King Jr. Social Justice Award this year,” says David Kotz ’86, the Champion International Professor in the Department of Computer Science, interim provost, and Boateng’s longtime mentor. “His work to create and operate the Nsesa Foundation has made such a great difference to so many young people in Ghana.”

Boateng entered the realm of research during his first year at Dartmouth, pursuing robotics with Associate Professor Devin Balkcom. Boateng participated in a robotic knot-tying project that continued into his sophomore year. His contributions were acknowledged in the subsequent published report.

In his junior year, Boateng began work with Thayer School of Engineering’s Kofi Odame, an associate professor, and Ryan Halter, who also holds adjunct appointments in computer science and at the Geisel School of Medicine.

“I was trying to build a chest-belt device for use at home to digitally replicate the shape of the chest during breathing, monitoring cardiac output,” Boateng says. “It made me realize that, though I had the skills to do both hardware and software, I was more interested in the software aspect of research.”

In the years to follow, Boateng stayed on the software path and figured prominently in the development of the Amulet, a joint project of Dartmouth and Clemson University, spearheaded by Kotz and Halter.

Our vision is to spur an innovation revolution-a movement in which the youth across the length and breadth of Africa are developing innovative solutions to problems in their communities using STEM. 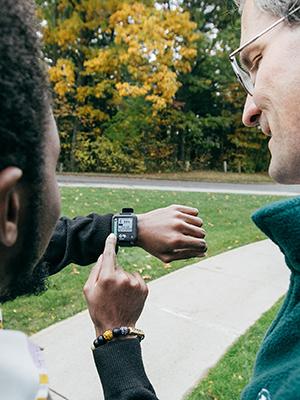 Up and running, the Amulet is demonstrating its capabilities. (Photo by Robert Gill)

Kotz and his colleagues refer to the Amulet, which looks much like smartwatches available today, as “computational jewelry” that can include sensors to collect physiological and environmental data for personalized health care. It can also incorporate custom features and software.

“Having recently worked on various projects on my own time related to mobile health, the main thing that drew my attention to the Amulet was its function as a platform for mobile health applications,” says Boateng.

“Amulet hardware and software is open-source under a generous license that allows free use by the research community,” says Kotz, who encourages researchers and developers to download the details and make their own Amulet wearables.

“George has been instrumental in developing the most advanced applications for the Amulet platform,” says Kotz. “For his senior honors thesis, he developed a means of measuring stress with the Amulet and conducted a study to validate its effectiveness.”

Boateng’s senior thesis won him the Neukom Prize for Outstanding Undergraduate Research in Computational Science. He also received the Ernest Everett Just Award in Mathematics and the Sciences and Thayer’s Dean’s Service Award.

“In his master’s thesis work, George developed and validated a set of applications to measure physical activity among older adults,” says Kotz. “He spent the year since working with Associate Professor John Batsis at Dartmouth-Hitchcock to refine these applications and conduct a larger study of their effectiveness.”

Boateng’s work has also produced three scientific papers, on which he is first author, that describe software applications designed to run on the Amulet.

With his two degrees in hand, Boateng went to work as a research scientist in the Department of Computer Science, continuing to develop software for the Amulet, a job he will leave in June to pursue a PhD in Switzerland.

“I’m excited for George as he heads off to graduate school at ETH Zurich—one of the most prominent science and engineering schools in Europe—where he will continue to work on innovative applications of technology to health and wellness,” says Kotz.

Boateng’s post-PhD plans are uncertain, other than his intention to continue working in mobile health. “I am interested in industry but I also like teaching. I am not really sure,” he says. “I expect that I will be building apps for smartwatch and smartphone devices, much as I am doing now for the Amulet—just on different platforms.”