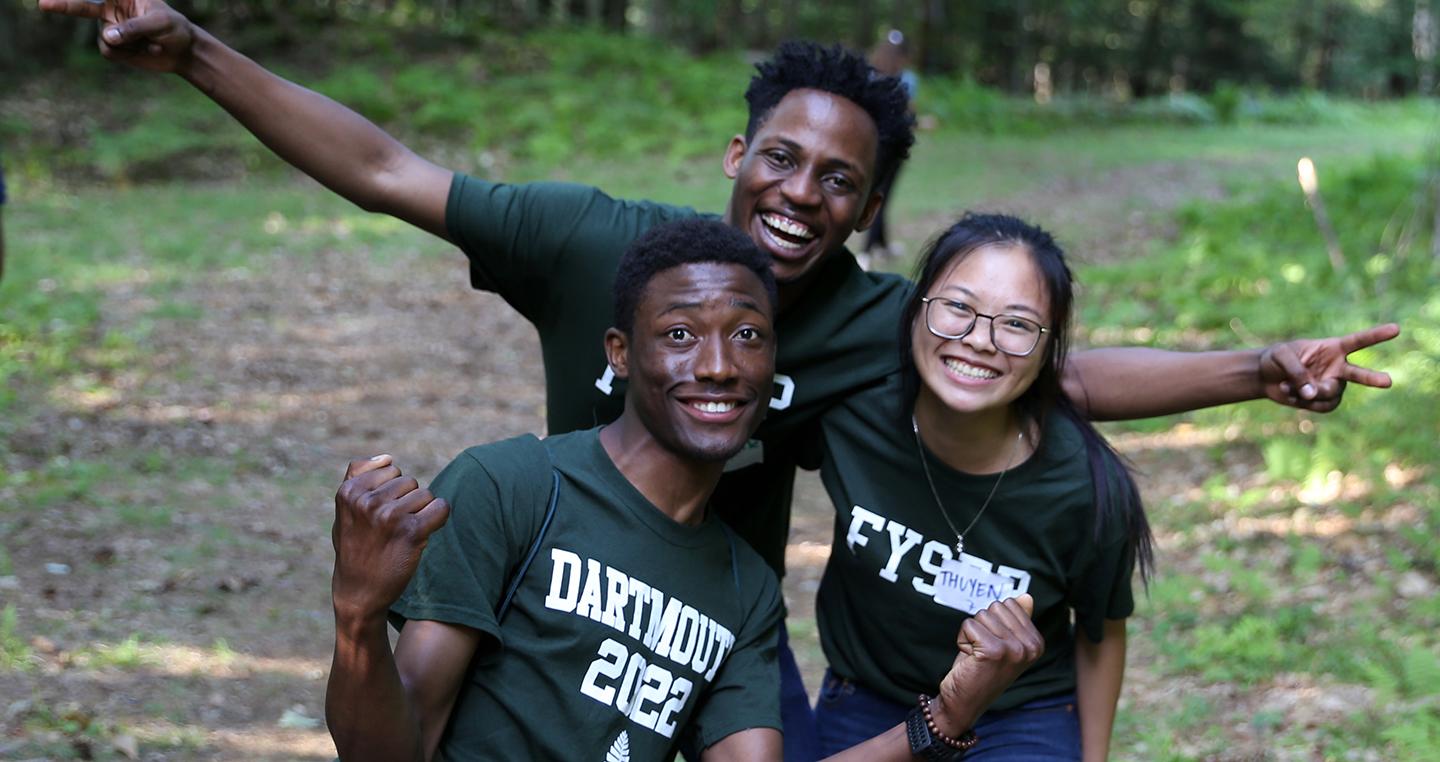 Dartmouth is reaffirming and expanding its commitment to help first-generation and low-income students thrive and succeed, thanks to $13 million in private gifts, including a $10 million commitment from A. George “Skip” Battle ’66.

Announced Thursday night at a regional campaign and 250th anniversary celebration in San Mateo, California, these gifts will create a more robust and comprehensive package of initiatives to support first-generation, low-income students as they make the transition to a highly selective academic environment.

“Although Dartmouth covers 100 percent of a student’s demonstrated financial need, we must do more to make sure all students have the tools and supportive programs they need to succeed,” President Philip J. Hanlon ’77 told a crowd of about 400 alumni, family members, and friends. “Thanks to Skip’s generosity, we’re growing these essential programs to level the playing field for our first-generation and low-income students.”

With a goal through The Call to Lead campaign to secure a total endowment of $18 million for these initiatives, Dartmouth plans to expand the First Year Student Enrichment Program’s (FYSEP) signature pre-orientation introduction to college life from five days to four weeks, and create a cadre of peer academic coaches. The pre-orientation program will be fully expanded by 2020 and will serve approximately 100 members of the Class of 2024. Dartmouth intends to raise the remaining $5 million needed for this work over the coming year.

The new initiatives also will promote equal access to all aspects of the Dartmouth experience for students with financial need. The College intends to triple funds available to cover emergencies and other needs not met through Dartmouth financial aid, ranging from medical costs and eyeglasses, to professional attire for interviews and living expenses during unpaid internships.

Trustee Mitch Kurz ’73 and his wife, Sandy; Ann and Leslie T. Chao ’78; Jennifer and Alan Fournier P’19; Samantha Schnee ’92 and Michael Hafner ’89; Maxine and Roberto Mauricio ’90; Melissa and R. Bruce Rich ’70, and The Beloved in Christ Foundation joined Battle in underwriting the expansion of the program.

Together, the new scholarships and expanded first-year, low-income student initiatives will make a Dartmouth education more accessible and affordable for generations to come.

Established in 2009, FYSEP supports incoming students of limited financial means who are the first in their families to attend college. Participation has more than tripled during the past decade, with the program serving 92 members of the Class of 2022.

“Income inequality is one of the urgent concerns of our time,” said Battle, who was the first member of his family to attend a four-year college. “Over the past decade, Dartmouth has done a good job of opening its arms to prospective students who have the character and the capability to do well here—regardless of their resources—but making the transition today can be so much harder than when I was a student.

Currently, students begin their FYSEP experience with a five-day, residential, pre-orientation introduction to Dartmouth, conducted by the part-time program director, campus resource staff, and 10 dedicated faculty who represent all academic divisions. Juniors and seniors, many of whom are first-generation students themselves, provide program support for their incoming peers. The pre-orientation session offers sample classes with Dartmouth faculty in a low-pressure environment and introduces strategies to address some of the challenges—academic and social—that students may face in their first year.

FYSEP also provides students with ongoing enrichment activities throughout their first year as part of a supportive community.

“A classroom discussion about homelessness may be abstract to many students,” he said. “But we have students in our program who have experienced homelessness and can talk about it firsthand.”

Beyond FYSEP, Dartmouth offers mentoring and other resources to help all first-generation students and students from low-income families throughout their undergraduate years.

A Record Of Achievement: Fysep Completes It First Decade

During its first 10 years, the program has demonstrated its ability to enhance participant academic performance. FYSEP students have achieved a higher grade point average than their peers who did not participate in the program; their current six-year graduation rate exceeds 95 percent—compared to a national average of less than 50 percent; and they are much more likely to tap into a variety of on-campus support programs.

Many first-generation, low-income students also have earned undergraduate honors at Dartmouth. Of the seven most recent recipients of the Churchill Prize, for example, four were FYSEP students.

Gricelda Ramos ’18 is one of many recent first-generation students recognized for their achievements at Dartmouth. Her classmates selected her to serve as a class marshal. Ramos now attends the Paul Nitze School of Advanced International Studies at Johns Hopkins.

Skip Battle ’66: A Legacy Of Support

This gift is Battle’s second major commitment through The Call to Lead: a Campaign for Dartmouth, raising his total campaign support to $15 million. In 2015, the Battle family made a challenge gift to spearhead fundraising for the new Moosilauke Ravine Lodge, which opened last year. Prior to this campaign, Battle provided important gifts to Dartmouth’s Ethics Institute and women’s rugby program.

After graduating from Dartmouth and receiving his MBA at Stanford, Battle held a variety of positions at Arthur Andersen LLP and then Andersen Consulting LLP over 27 years. He is now a senior fellow and senior moderator at the Aspen Institute, an educational and policy studies think tank. He has served on the boards of several corporations during the past three decades, including Expedia, LinkedIn, Netflix, and OpenTable.

“Supporting first-generation and low-income students is a great investment,” said Battle. “We’re helping make these students more influential within the campus community, which benefits everyone at Dartmouth—and ultimately it benefits the communities where they’ll live and our entire country.”