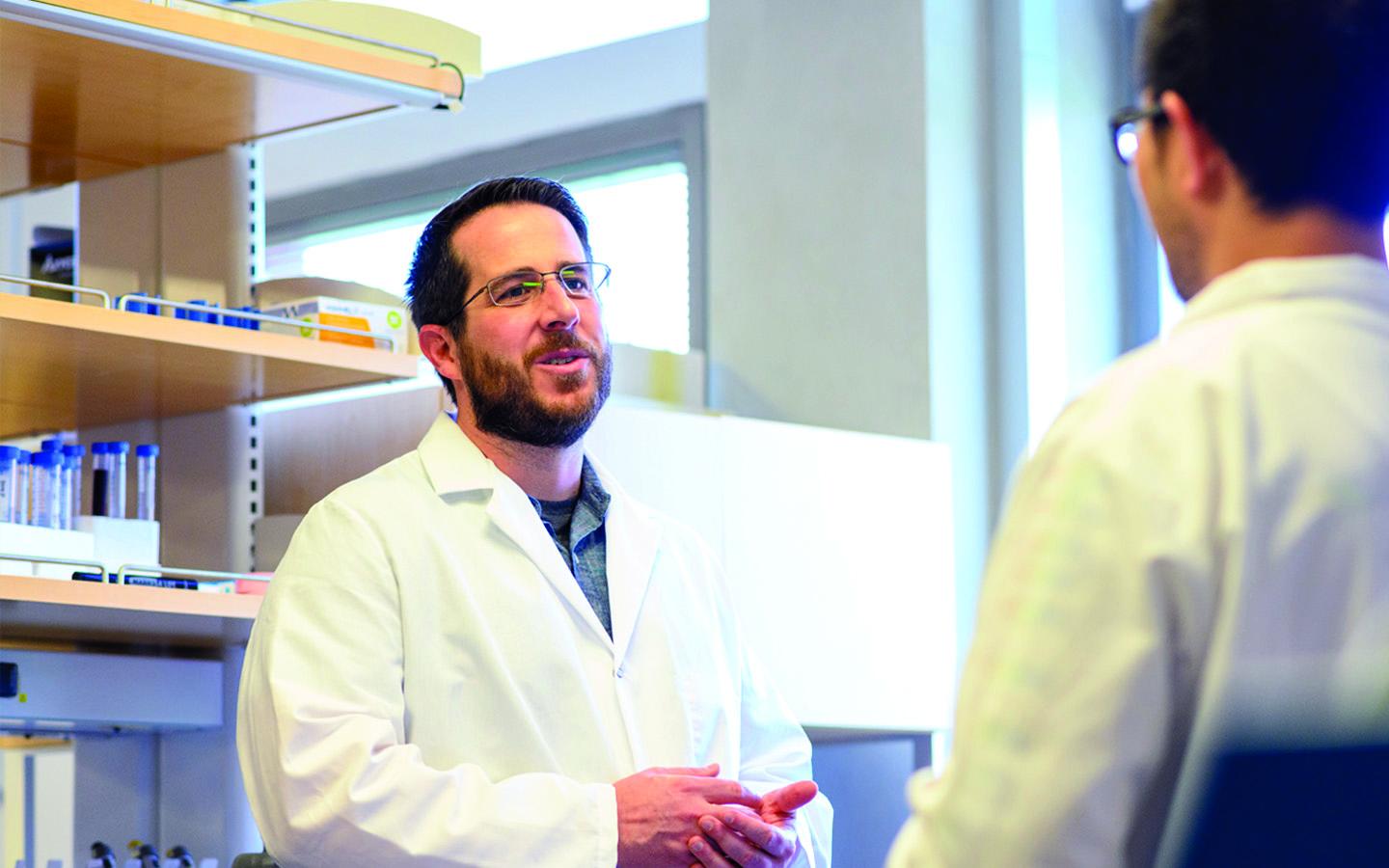 Dartmouth has announced that the inaugural McGuire Family Prize for Societal Impact will be presented to Jason McLellan, a structural biologist whose groundbreaking coronavirus research conducted at the Geisel School of Medicine laid the foundation for COVID-19 vaccines that have saved countless lives.

McLellan, a former assistant professor at the Geisel School, is now the Robert A. Welch Chair in Chemistry at the University of Texas at Austin. He will receive the award at a ceremony Friday, May 13, during the Dartmouth Innovation and Technology Festival and the grand opening of the West End District.

Carolyn Carr McGuire TU’83 and Terry McGuire TH’82 established the $100,000 prize as part of The Call to Lead campaign to honor members of the Dartmouth community who have significantly benefited humankind, society, or the environment. Eligible areas of impact encompass a range of achievements, including fundamental science, stewardship of natural resources, and societal leadership. The prize winner is determined by a selection committee comprised of Dartmouth faculty and staff.

“We received many outstanding nominations for this prize,” says Eric Fossum, the John H. Krehbiel Sr. Professor for Emerging Technologies and chair of the selection committee. “However, given how COVID-19 has touched each of us in some way, Dr. McLellan’s research defines societal impact in breadth and depth.”

McLellan says he is honored to receive the McGuire Family Prize, especially as it’s coming from former colleagues at Dartmouth, “where I started my lab and where I was given the opportunity to be an independent investigator.

“Improving people’s lives is exactly what I hoped to do by going into science and particularly working in vaccine development,” he says. “You hope that you can contribute to maybe one major vaccine during your entire career. To be able to contribute to these coronavirus vaccines, which have been given to so many people to blunt a hopefully once-in-a-century pandemic, is incredible.”

McLellan and his team at the Geisel School developed the vaccine technology that is the basis for many COVID-19 vaccines used across the planet, including those manufactured by Pfizer, Moderna, and Johnson & Johnson. Coronaviruses have a key protein on their surface, the spike protein, that changes shape before and after infecting a cell. Initially studying the SARS and MERS coronaviruses, McLellan and his postdoctoral researcher Nianshuang Wang developed the means to genetically modify the gene sequence that encodes the protein, essentially locking the structure in place, which allows vaccine antibodies to be more effective.

McLellan and Wang moved to UT Austin in 2018. In early 2020, as the COVID-19 pandemic first broke out in Wuhan, McLellan, Wang, and Dartmouth graduate student Daniel Wrapp applied the spike protein-stabilizing technology developed at Geisel to a newly identified virus, SARS-CoV-2, and shared the results of their research with collaborators at the National Institutes of Health. This version of the spike protein was used in the first U.S. COVID-19 vaccine trials and by other vaccine manufacturers in the months that followed.

More than five billion people worldwide have received at least one dose of a COVID-19 vaccine, with a large percentage of them receiving vaccines that use the stabilized spike protein technology.

Terry McGuire says McLellan represents the leadership, determination, and initiative that he and his wife intended to honor when they established the prize, which emphasizes broad impact and the number of people whose lives are improved.

“The prize recognizes talented people who aren’t daunted by the size of a problem, but instead realize that if they are willing to take on and solve a major challenge of our time, they can have a huge impact, often measured in millions of lives touched,” says Terry McGuire.

Dartmouth President Philip J. Hanlon ’77 thanked the McGuires for establishing a prize that honors individuals who exemplify values that are at the core of the Dartmouth ethos.

“The McGuire Family Prize recognizes those who are dedicated to making a difference. There could be no better example of what it means for a scientist to answer the call to lead. I hope every student on our campus today and everyone in our community are inspired by the example of Dr. McLellan,” says President Hanlon.

McLellan emphasizes that tens of thousands of people contributed to the success of the coronavirus vaccines: scientists from academia, government, and industry; manufacturers; volunteers in clinical trials; and health care workers.

“The collective will of tens of thousands of people creating, testing, and delivering the vaccines is something for humanity to celebrate,” he says.

The Dartmouth Innovation and Technology Festival, May 12–14, is open to the entire Dartmouth community, residents of the Upper Valley, and anyone curious about the power of technology to advance scholarship in all disciplines. The weekend’s slate of activities will include presentations and panel discussions on topics such as artificial intelligence, health care, transportation, and cryptocurrency; makerspace demonstrations; interactive learning experiences; and family-friendly activities, including a community picnic and Friday evening light show. Registration for the weekend is free and encouraged.